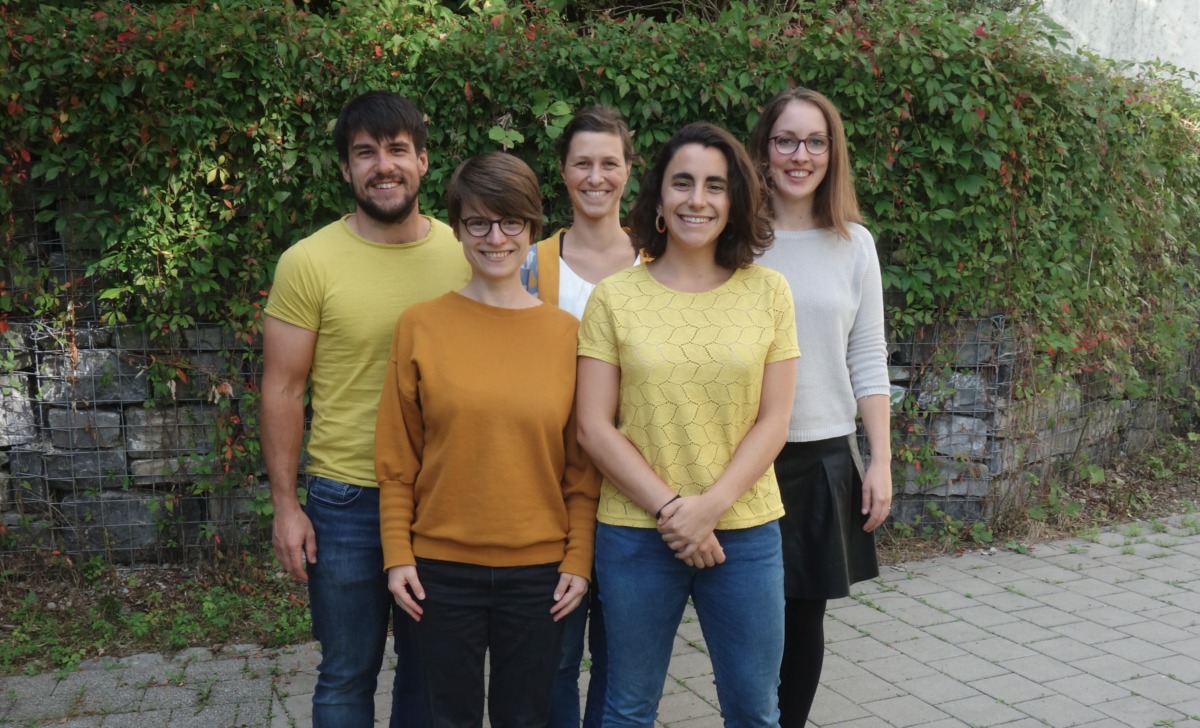 Franziska Flegel (she/her) ((Dr. rer. nat.) studied Physics at Humboldt-Universität zu Berlin and earned her PhD in mathematics at Weierstrass Institute for Applied Analysis and Stochastics in Berlin (WIAS). In April 2018 she moved to Konstanz and started a new position as software developer at SEITENBAU GmbH after the parental leave for her second child. She already co-organized I, Scientist 2017 in Berlin and is board member of the Lise-Meitner-Gesellschaft e.V.
She initiated I, Scientist because she would like to increase the visibility of role models for underrepresented and discriminated groups of people with background in the natural sciences and mathematics. She would like to create a safe space where everyone can meet and share their stories.

Felizitas Kirner (she/her) (Master of Science) is a PhD student in the department of chemistry at the University of Konstanz. Her research focuses on nanoparticles and their assembly to superstructures. During her Master studies she was involved in organizing the conference “Frühjahrssymposium 2018”.
She joined the I, Scientist team because science should be able to offer equal opportunities to all people independent from gender. With this conference she wants to help to develop a space to discuss pathways to overcome gender biases and privileges.

Irene Sánchez Arribas (she/her) (Master of Science) I am a PhD student at the University of Konstanz working with nanomechanical systems. My current goal is to study how light interacts with the mechanical properties of very small and thin drums – as thin as a single layer of atoms!

During my studies, I have seen how the number of women decreased compared to the number of men as the subject became more and more technical. On top of this, it is also well known that there is a salary gap between men and women and a lack of women working in STEM fields. For this reason, I try to share my passion for science with the young ones by giving talks and activities in high schools, hopefully making them understand than science doesn’t distinguish between gender or race.

I joined the I, Scientist team because diversity is far from being achieved in science. I believe this conference is a perfect opportunity to raise awareness of this problem and discuss what actions could we take to improve gender and cultural diversity in the field.

Sandra Weimer (she/her) (Dr. rer. nat.) earned her PhD in nutritional sciences at the University of Jena.
After a 3 month period in the USA at Harvard Medical School, she did a Postdoc at the ETH Zürich.
Currently she works works in the University of Konstanz as an advisor on gender consulting where she organizes interdisciplinary exchange between the collaborative research centers of the german science foundation. While managing these aspects and two children she also pursues a masters degree in science management.

Inara Mahkamova (she/her): I am a PhD student in neuroscience at the LMU, Munich, working on rehabilitatiton methods for patients with visual disorders after acquired brain damage. In my academic pathway so far, I have been surrounded by many women, but I am aware of the fact that this is temporary: The higher you climb the academic ladder after the PhD phase, the less women you have as colleagues. The issue of underrepresentation is even more dramatic if you include factors such as ethnicity, sexuality and disability, stressing the importance of intersectional thinking.
This is frustrating as having no role models can make you question whether you belong in spaces of power traditionally occupied by (white) men. The winners of this system oftentimes do not feel the urge to challenge the status quo, which is why I think conferences like I,Scientist are extremely important. After attending the conference in 2019, I felt inspired to contribute to its continuity and remind everyone, including myself, that we should keep making steps towards real equality.

Marie-Claire Kabengele (she/her): (Master of Science) I am a PhD student at the Department of Psychology at the University of Konstanz. One of the aspects my research focuses on is the reduction of stereotypes, specifically work-related gender stereotypes, as well as increasing women’s and girl’s motivation to pursue careers in STEM fields. Having experienced the lack of diversity and diverse role models in academia, I feel it is of the utmost importance to increase the visibility of marginalized groups, to support and encourage one another and build strong networks in order to challenge stereotypes and the status quo. After attending the 2019 I,Scietist conference in Berlin I seized the opportunity to work with the I,Scientist team and contribute to building new, inclusive concepts and creating equal opportunity.